This years Sons of Simon De Montfort Battlefield tour took us to view some significant battles involving the English Civil War and the Wars of the Roses. It would take us West to Powick Bridge and then to Ripple Field, through Tewkesbury, then Lansdowne Hill and Roundway Down before heading back up to the midlands with a stop off at Stow on the Wold. In all it took the best part of three days, with two nights rest at a couple of Premier Inns along the way.

Wednesday saw us arrive at Powick Bridge just after lunch. Our main guide was Bill, who did an excellent job of recounting this first engagement of the English Civil War. Although much of the meadow area beyond had been developed, the small bridge and laneway still gave a good impression of what it must have been like.

No doubt the track itself had been widened over the years, and much of the hedging trimmed away. But it still gave a fair idea of what the troops must have experienced at the time.

Interestingly, there was a monument and sign for one of the final battles of the Civil War (Worcester) which had also involved the area around Powick Bridge. It just goes to show the significance of such small and innocuous looking places.

Our next stop was only half an hour away, as we headed towards another of the Civil War's significant engagements. Parking next to Ripple Parish Hall we stepped onto the edge of the field right at the base of the Parliamentarian positions. Ripple Field is one of those battlefield locations that is luckily well preserved and you can afford yourself of an unimpeded view. It's easily identified due to the line of the two roads which created the left and right flanks of both armies.

Bill's presentation highlighted how, once more, the lanes and hedges had played a contributing factor. This time in allowing Royalist troops to infiltrate and threaten the Parliamentarian position on the high ground. Eventually forcing them to fall back.

The Thursday morning saw us arise from a grand breakfast to take on Dave's tour of the Wars of the Roses battlefield at Tewkesbury. This particular tour was fairly well contained and accessed by being so close to the Cathedral and town centre. The town had recently held its own official commemoration, and so was still bedecked in banners and standards of the participants. Despite a light rain, Dave took us along the main positions of the Lancastrian defenders including the area of their terrible rout through 'bloody meadow'. The Cathedral holds the remains of several of the Lancastrian nobles and is an absolute wealth of history. Also nearby is a small museum with an upstairs room dedicated to the battle. It has a few artifacts and a model reconstruction which are well worth checking out.

Our next visit was back into English Civil War territory with a trip to Lansdowne Hill. The site is impressive partly due to its panoramic views across the Severn Valley. It must have been equally as daunting for the armies of Sir Ralph Hopton and Sir William Waller to have navigated these hills and then engage in desperate battle. After taking a brief respite in a parking area, Chris explained that Hopton had positioned his camp here at Tog Hill before moving across Freezing Hill, down into the valley and advancing up against the Parliamentarian forces on Lansdowne. The latter is extremely steep and I think gave everyone an appreciation of how difficult this advance would have been. There was quite a touching monument at the top of Lansdowne which marks the point where Sir Brevill Genville lost his life along with a panel explaining the battle. 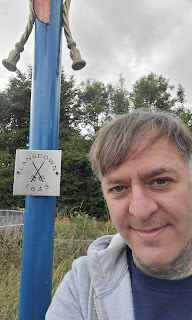 Roundway Down and Stow on the Wold.

The last day was a visit to Roundway Down. It took us a while to find the location because there was a distinct lack of signposts. One of our vehicles ended up in Devizes, but we soon found the correct place with the aid of Google Maps. Roundway is also relatively unspoilt and Bill gave a stirring description of the likely position of the opposing armies. It was a beautiful clear day and imagining these two large armies arrayed before you wasn't difficult. One thing that struck me was the eventual collapse of the Parliamentarian cavalry on the left and just how far the rout would have been before careering over the steep banks toward the South West.

Our final visit to Stow on the Wold was a relaxed affair and mainly involved a walk around the village. The small cross to mark the final defeat (and Astley's exhausted surrender) was quite poignant. As was the church where many Royalist prisoners were kept over night after the battle. 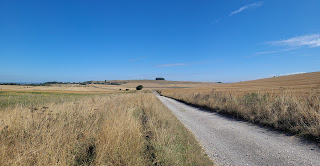 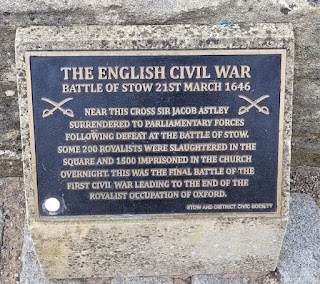